More of a curiosity than a serious railway, but with an interesting history, was the Porthcawl Miniature Railway. The quarter-mile, 15 in. gauge miniature railway opened in 1935, the year of the Silver Jubilee, using two steam-outline petrol locomotives. Rolling stock comprised new bodies based on former Romney, Hythe & Dymchurch Railway chassis. The locomotive illustrated below is no.1936 (of that year), 'Coney Queen'. The line closed and was dismantled at the end of the 1986 season. 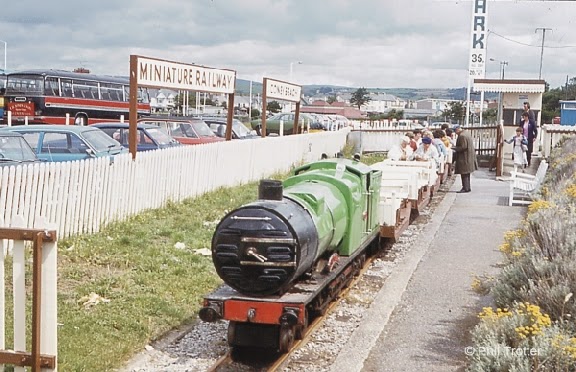 The line was originally built in 1935 as an added attraction to the Fun Fair on land belonging to the owners at the time.The line was 400 Yards long and consisted of a station at each end, Coney Beach at one end and Pier End at the other. It was positioned between the road, which ran alongside the eastern promenade from the funfair to the harbour basin and what was at the time the salt lake, which was used for swimming, diving and boating. The Great Western Railway station was visible across the salt lake and was more or less parallel with the P.M.R. The turning triangle of the G.W.R. swung across the end of the salt lake and was about 40 Yards from the P.M.R. Coney Beach station.

Harbour
Originally the Standard gauge line also crossed the road and went behind the funfair to the old gas works. The salt lake was originally the inner harbour of the Porthcawl docks, which were closed in the late 19th Century. It was completely filled in during the 1930's and has been used as a car park ever since. The Standard gauge line was closed and removed during the early 1960's leaving the P.M.R. to survive until about 1986.
The line itself was single  with a loop in the middle, as is shown in the diagram above and was laid to 15 inch gauge. The engine shed was disguised as a tunnel. Whether the loop was there from the beginning I don't know as there was only one train for the first season, but I imagine that it was.
The train that was originally used consisted of ‘Silver Jubilee’; a steam outline petrol powered 4-6-4 loco with a hydrostatic transmission that was originally used to operate the periscope on a WW1 submarine. This is the loco that I now own. The original train consisted of 6, 4 wheel, open coaches that used carriage under frames from the Romney, Hythe and Dymchurch Railway in Kent. One interesting fact is that the loco always faced Coney Beach because it only had one cab door cut out which was on the road side of the railway.
In 1936 a second train was acquired. This being ‘Coney Queen’ plus a train of articulated stock to the same pattern as the 4 wheelers already owned. In later years, certainly by the ‘60’s, the 4 wheelers were behind ‘Coney Queen’ and the artics behind ‘Silver Jubilee’. It may have been that they were always this way round. I need to investigate more.


Voltage
While the only visible difference between the two was that ‘Coney Queen’ had cab doors on both sides of the body, ‘Coney Queen’ differed from ‘Silver Jubilee’ in that it was fitted with electric transmission, from a Tilling-Stevens bus. Tilling-Stevens buses were often used by fair folk as transport as the dynamos produced 110v DC, the standard traveling show voltage, which is still current today.  Therefore they had a vehicle, which would be able to transport rides around and then power them when erected. ‘Silver Jubilee’ was converted to electric transmission at some time, possibly after WW2 and probably due to spare parts for the original transmission becoming impossible to obtain. At the same time ‘Silver Jubilee’ was re-engined with an Austin 16hp engine which made it necessary to raise the bodywork by 6 inches to cover the overhead valves on this type of engine. A chrome strip was applied to the join between the original body and the extension, as the Chrome strips over the firebox did not now reach the footplate also the cab doorway was covered over at some time in the 50’s. ‘Coney Queen’ had an Austin 12 Sidevalve engine, which fitted under the original body height
Operation was for the train leaving Coney Beach to pass along the loop outside the tunnel while the train from Pier End passed through the tunnel. This was what every child wanted as it was far more exiting to see the inside of the tunnel than the outside! The point blades were pushed over by the train wheels while the lever nodded alongside the track. When reduced to one train working in the '70s, both points were fixed to run round the loop. Because of safety regulations by the late '70s, the last car in the train, which was now down to 4 cars, was fitted with a barrier to stop people falling off the end. For the first time a guard whose job it was to control the riders during the trip was required. How things change.

Livery
The original livery of ‘Silver Jubilee’ was lined green with chrome strips over the firebox and a chrome cap to the chimney, the coaches were chocolate and cream so as to reflect the G.W.R. trains on the opposite side of the salt lake. I believe that ‘Coney Queen’ and its train was painted the same. Both locos lost their chimney caps by the late ‘50’s. When the G.W.R. became B.R.(W.R) and the coaches became Carmine and Cream, the P.M.R. followed suit and the coaches were painted red and cream. The coaches became Chocolate and Cream again at the end of the ‘60’s, the locos receiving green with a simpler lining, Silver Jubilee had lost its Chrome lining by this time. Around 1972 or so ‘Coney Queen’ was sent for a major overhaul which included fitting of a diesel engine and a repaint in lined blue to match B.R. locos although they weren’t to be seen in Porthcawl! The 4 wheel coaches were also painted in blue and cream to match. In its last years ‘Coney Queen’ was painted red with what appears to have been a dark blue smoke box, the coaches reverting to red and cream. It had an amber flashing beacon added to the front of the smoke box as a safety measure. The P.M.R. carried on until the mid '80s with no further changes when closure came.
As Silver Jubilee was taken out of service around 1970, apart for being called upon during the long hot summer of 1976, it was never painted in blue, as was ‘Coney Queen’.
While all the stock and rails have gone along with the tunnel and station buildings, much of the trackbed remains undisturbed. The portion of trackbed where the tunnel was has been pushed back so as to make more room in the car park, although why there was need for such a small increase in the size of an already large car park I don’t know
Just a few other points, the locos were not fitted with radiators, but had water tanks fitted in the smoke boxes. The steam created as the engines warmed up gave the impression of a real steam engine. Each time the trains stopped in their 'home' station ' i.e. with the locos at the tunnel end of the train, the drivers would pour a can full of cold water down the chimney to replenish the tank. I think that the engines were stopped while in the stations so that they didn't overheat.


Preservation
I got involved with ‘Silver Jubilee’ back in 2000 while surfing the net one evening and came across it as being at Windmill Farm Railway in Burscough, Lancashire. I had already found it and 3 coaches at the Severn Valley railway some years earlier but had lost track of it. Anyway I contacted its then owner and later called in to see him and the loco while returning from Yorkshire.  Some time later I said to him that anytime he wanted to sell, to let me know. Of course, he wanted to sell. So, putting money where my mouth is I bought it.

Unfortunately, when I bought it, it had already been dismantled and the dynamo and motor had been kept by a previous owner as spares for some of his other locos. Luckily he decided that they weren’t the right ones and I was able to get them as well. Only one major item is missing, the petrol engine. This isn’t a major problem as the engine used was the same as that used in Austin A70’s, Gypsies and Taxis and can be found fairly easily. I may change the engine back to a side valve type to be able to change the body back to its original appearance. I brought it back to South Wales in September 2002 and currently it’s waiting for me to sort out its accommodation before I start restoration. I’ve already received invites to run ‘Silver Jubilee’ at Windmill Farm and from the Perrygrove Railway in the Forest of Dean. All I need to do now is to get things moving. After all its only 12 feet long and weighs one and a half tons or so, shouldn’t take long at all.

One other thing to mention is that ‘Coney Queen’ also still exists, at least, some of it does. Apparently it was converted into, or should I say, parts of it were used in, a loco for the Gullivers World Theme Park in Warrington.

If you have, or, have access to, any information, stories, photographs or anything at all about the railway, I would be pleased to hear.
"Having a wonderful time..."
In common with many other seaside miniature railways, the Porthcawl line featured on several holiday postcards. Examples of these are shown below; the upper, earlier one was published by Frith's and the lower one by Valentines. 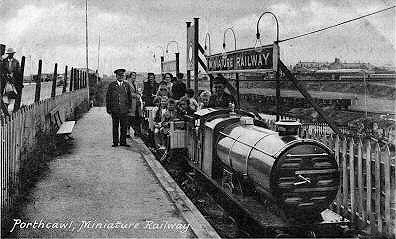 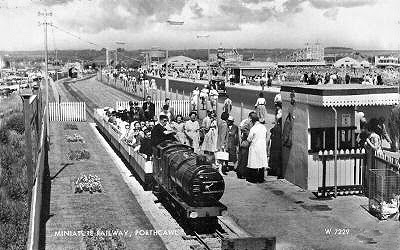