What's Left of the Mumbles Railway?

(Main article first published in the South Wales Evening Post, 'Back on the Tracks' supplement,  Saturday 21 February 2004 and in edited form in the main paper, Monday 15th March, 2004.)

The Mumbles Railway was incorporated as the Oystermouth Tramroad, which began operating in 1806 and became the World’s first passenger-carrying line when a contractor was permitted to run a horse-drawn coach a year later.
The Oystermouth Tramroad, of course, eventually became the Swansea & Mumbles Railway which closed at the beginning of 1960 amongst much wailing and gnashing of teeth - sporadic outbursts of which continue to this day.

Emotions
If one considers the emotions which are stimulated in Swansea by mention of the words “Mumbles” and “Railway” in the same sentence, it is perhaps surprising that so little of it has been preserved, particularly in comparison with similar situations elsewhere in the UK.
In January 1960, however, the transport preservation movement which has given rise to splendid organisations such as the Severn Valley Railway and the National Tramway Museum, was still very much in its infancy. And Richard Beeching was still eighteen months away from being appointed Chairman of the British Railways Board; abandoned railways were a relatively unusual concept.
Contemporary press cuttings confirm that there was very little interest locally in preserving anything substantial, not even by local museums. One of the electric cars eventually found a short-lived home at a fledgling preservation site in Leeds, but it was only relatively minor items which gravitated to local museums and, inevitably, to private collections.
Surviving
Those items which have survived now take on greater significance and a convenient place to start tracking down relics of the line is Swansea Museum. Exhibits include the end section of electric railcar no.7 which was operated the last service all those years ago and which later was left abandoned for over a decade at the rear of Swansea’s Royal Institution. Thankfully, it is now in excellent condition and can be seen daily in its proper context as the last surviving part of a fleet of thirteen similar vehicles.

Also at Swansea Museum is a replica of the first passenger vehicle of 1807. This yellow and black horse-drawn coach is itself of some vintage, having been constructed in 1954 as part of the railway’s 150th anniversary celebration. It was built at South Wales Transport’s Ravenhill depot and the underframe was part of a Hardy four-wheel petrol locomotive purchased in 1929 to shunt the electric cars at Rutland Street depot. The museum also has a number of smaller exhibits, such as a pantograph current collector, tickets, signs and photographs.

Plaque
Older readers will be aware that the start of the Mumbles Railway’s route to the pier was from Rutland Street Terminus, alongside what is nowadays Swansea Leisure Centre. This fact is commemorated by a plaque on the seaward pillar supporting Oystermouth Road footbridge. The depot was on the site now occupied by St. Davids multi storey car park.


From Rutland Street to St. Helens, the central reservation of the Oystermouth Road dual carriageway marks approximately the position of the railway with the only remaining structure being the short underpass opposite the Tesco store through which once ran the lines connecting the Mumbles Railway to the South Dock rail network.


Slip
At St. Helens (the ‘Slip’) the Bay View pub - itself a landmark of some history - for a while acknowledged the railway in its overhanging sign. The Mumbles Railway formerly along what is now centre of the road here, with the LMS Victoria to Pontarddulais line between it and the beach.
A remnant of the railway can be found here on the landward side of the road where two old electricity control boxes exist alongside the footbridge. One bears the legend ’SWT Co. Ltd.’ and was once part of the power system of the railway.
There is little to be found between here and Blackpill, the trackbed having been totally consumed beneath the roadway until that point. It is worth mentioning, however, that Swansea University Library houses SWT and tramway minute books which give a significant insight into the operation of the railway. Included in the collection is a cash book from the very early days of the Oystermouth Tramroad.
On the approach to Blackpill, those with sufficient motivation to go exploring in the undergrowth alongside the service station will find evidence of the Clyne Valley tramway, formerly a branch off the Mumbles Railway and used to extract minerals from the Rhydydefaid area. 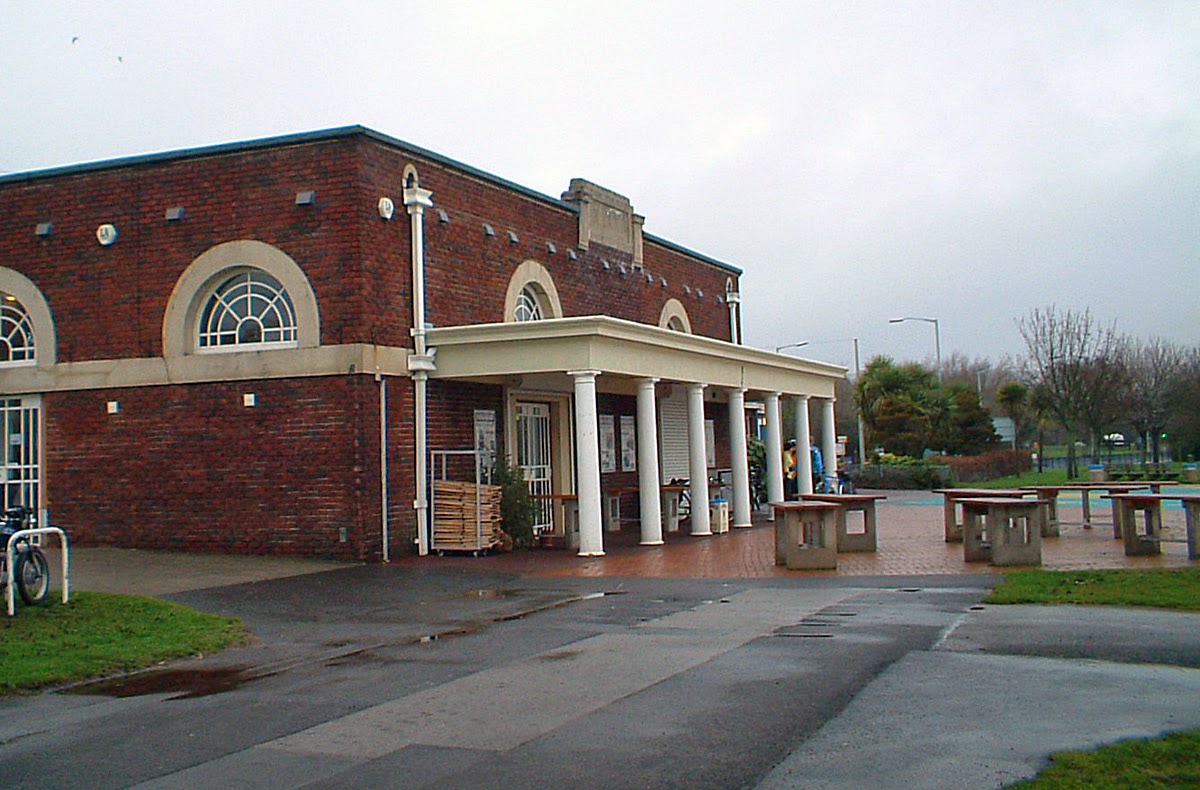 Substation
After many years as a storage unit, the one time Blackpill substation now has found use as the commendable ‘Junction’ café. This largely red brick building was constructed in 1927 and formerly converted power to 600 volts DC for supply to the railway’s overhead wires. The concrete ‘Blackpill’ name above the canopy still exists and from a distance on the seaward side the remains of wartime camouflage paint can just be made out.
The greatest legacy of the Mumbles Railway is the footpath-come-cycleway between Blackpill and Mumbles which is one of the finest short walks anywhere in the UK. Sharp-eyed walkers will spot evidence of the occasional traction pole footing in the sea wall. The traction poles were use to support the overhead wires, or catenary.
The whole raison d’etre of the Mumbles Railway was to collect the products of mining in the Mumbles area. There is ample evidence of quarrying to the rear of the guest houses on the approach to Oystermouth and, later, in the cliffs between Southend and Mumbles Pier. The remains of wooden sleepers dating back to steam days can be found in the grassy bank at the rear of the present Oystermouth bus shelter.

Vestige
The wooden building at Oystermouth car park is the last vestige of the station structure. One hears a lot about bus-rail interchanges these days, but prior to 1960 we had an excellent example here at Oystermouth with a spinal light rail route feeding into local bus services! Also nearby are two white traction poles dating back to the 1920s.
Approximately opposite the former station building is a plinth bearing a plaque commemorating the various stages in the Mumbles Railway’s history. The same story is told by a stained glass window unveiled in March 1982 at All Saints Church, Oystermouth.
Beyond Oystermouth most of the trackbed is still identifiable, although developments at Knab Rock have obliterated part of it. Incidentally, between Oystermouth and Southend a considerable amount of land was reclaimed from the sea when the railway was built and so the small park at this point is yet another legacy of the railway. At Southend, where the footpath widens, is the location of the former Southend Station.

Cutting
On the approach to Mumbles Pier the former trackbed passes through a short cutting and ceases just before reaching the Pier Restaurant and the terminus of the railway. Many of the lamp standards at this point are former traction poles from the railway and the Pier itself, opened in 1898, once was owned by the same company.
The final relics of the line can be found at the top of Mumbles Hill, the steep climb which leads from the Pier towards Bracelet Bay. At the top of the hill on the pavement is a small marker bearing the initials SWT which indicated the limit of the land owned by the company in railway days.
Memorabilia
As with all railways, total obliteration following closure is a process which can take many years and there is still plenty of evidence of the Mumbles Railway’s existence. One suspects that a great number of relics of the Mumbles Railway also survive in private collections; indeed, some emerge at auctions from time to time. Although they are not of any great monetary value, the surviving artefacts still remind us of a once very popular railway which continues to stimulate animated discussion whenever the subject is raised.